As promised - another product review. This week - Tzunami Deployer.

This application is used to copy data into SharePoint. The source of the data doesn't have to be sharepoint, but it has modules that support all versions of SharePoint as sources - so if you want to migrate data from your old sharepoint 2001 or 2003, this is the tool you are looking for. Other modules they have for sale are "file system" (I can hear some ears perking up...), "lotus notes" (a lot more ears?) "exchange", "livelink" and "eRoom"...interesting?

The Tzunami product allows you to model the data migration path manually - by loading the source and the target in two panes, and then dragging and dropping items (either documents, list items, document libraries and lists or event whole sites with sub sites) and then allows you to manually map metadata fields. 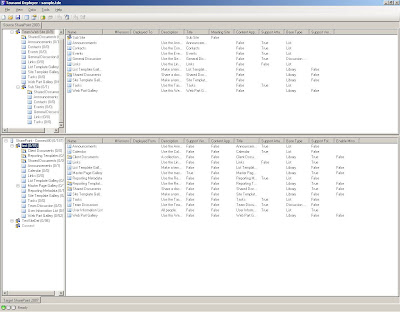 The application main screen. Source is on top. 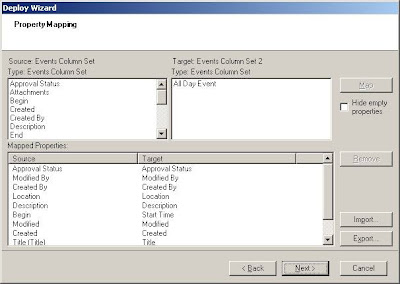 
There are important options like adding missing metadata fields to the target if they don't exist (or skip them) as well as security mapping (very important when moving between domains for example).

However, the big advantage of this tool compared to others I have tried is the "rule wizard". This feature allows you to predefine some rules on what will happen when you drag and drop. For example, you can specify that certain lists type will not be migrated, or that document libraries with specific names (or other properties) will be migrated using a specific predefined metadata mapping - and more and more. This richness of the rules wizard clearly makes Tzunami Deployer a very good tool - as it saves a lot of manual time. 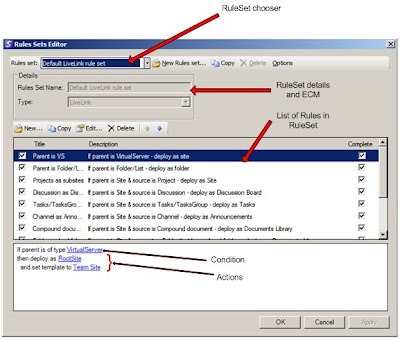 Finally, after you have modeled your deployment, you can "commit" the changes - at which point the application actually creates the sites\lists\libraries and copies the list items\documents. The application supports migrating versions as well as security settings, and retains the built-in fields like created, modified, created by and modified by.


Did I mention that the modeling application does not need to run on a sharepoint server? You just need to install the "remote deployer" on the servers you are deploying to\from, and you can run the application from any desktop. However, since it is the application that commits - it is recommended to run the commit on the receiving server - to reduce network load if nothing else.

That said, the developers in Tzunami still need to work on a few things. The user interface is at times frustrating - dialog boxes that cannot be resized (and you are stuck with annoyingly small treeviews with scroll bars) and dialogs that pop up without an option to set a default answer - something like "remember my answer, and apply to all" - specifically on metadata mapping. The metadata mapping dialog box will popup for each list and document library that you have dragged and dropped. This makes dragging and dropping a hierarchy of sites with a lot of lists and libraries a very annoying process - and can cause the application to crash if we are talking about thousands of lists (have you have tried to click "next" three thousand times?). The boys there assure me they are working on it.

But the biggest problem that I see with the software is that it is impossible to model a migration path and then run it on different servers. Basically the application stores the setting of the source and the target in its "project", and will not let you say "do that again, but this time on that server". This makes going through a series of tests (as in, development-test-production) impossible - since you will still have to do the dragging and dropping all over again. But if you are careful - and you make sure you dragged and dropped correctly, and you make maximum usage of the rule wizard (which is defined by XML files - which you can even generate yourself by code, a thing I find very useful), you can work around this limitation.

The flexibility of the rule wizard, coupled with the awesome support level I have been getting from the Tzunami support team (which is fantastic considering that I am in Australia and it is very hard to support us since we are usualy at a huge time difference with anyone else in the world) would have given this product a much higher score, if the annoying UI and some stability issues were gone. However, if you know what to beware of, and have enough patience for trial and error on the rules and how they work - you will find Tzunami to be your best friend. I give Tzunami 3.5 SharePoint Tips stars.