Just a heads up to what you can expect when you upgrade to Windows Server 2008 R2 (aside from all the technical things like virtualization improvements):

This means we can create “libraries” – which are virtual folders which replace the vista “search folder” with much more options.

An example is shown below – I created a virtual folder called “sharepoint files” and added the 12 hive and the office servers folders as well as the “logs” folder – and now I have an easy way to get to all three of them in windows explorer: 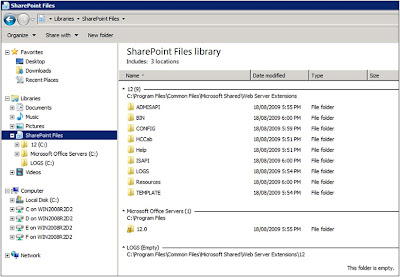 Posted by Ishai Sagi [SharePoint MVP] at 1:05 AM