A year has passed since my first post ever and what a blogging year it was...

So, not bad for my first blogging year. I thought of setting a numeric goal for my self - something like 365 posts in 2007, but I dont want to be like all of those bloggers who post just for the fun of it. I want my posts to contain meaningful information that is either original or hard to find. So I will make a different commitment - A 3rd of my posts will be code samples, and unless I am on vacations, one post a week minimum. And if I get an MVP, I will publish 3 free web parts + source code (hear that Microsoft?!)

I had also just learned that one of my articles was among the top 4 posts in 2006 from the SharePoint Buzz blog. While I appriciate the honor, I would like to make a note to the editors of sharepoint buzz - less advertising, more content! that site would be a lot more nicer if half the screen wasnt taken by ads. That said - thanks for the notice!

Have a good SharePoint year everyone. at least as good as these two seem to be having: 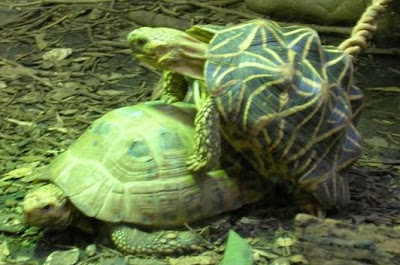 Picture taken in the Taronga Zoo in Sydney on Sat. 30 december 2006. Shows two turtles celebrating the end of the year.

We are definitely working on improving the theme to make it easier for our visitors.

Advertising is another thing that we are working on.

We hope that you all could join our community and express what we can improve on.